Would you like me to be your next speaker?

Here are examples of topics I can address:

Radical Islam in Europe: Our closest friends and allies are barely aware of the threat they face

Transatlantic relations: How Europeans will feel about America under the Trump Administration; what we should want from Europe

American foreign policy: America's leadership role is not as battered as it seems

Russia: The new Russia is unnerving, whether you're talking about foreign policy, democracy, or security

Civil/military relations in peacekeeping missions: Observations from my time as political advisor in Bosnia

Seven keys to success as a diplomat: Tips that will also work in corporations and other large organizations 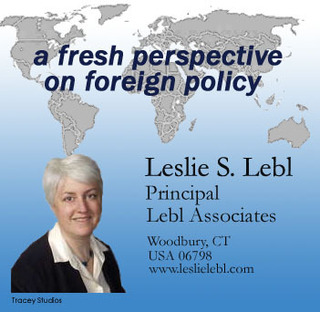 Click here for a brief video with excerpts from two talks.

Reaching out to students at all levels is a key element of informing the public about foreign policy. I have done so at many levels:

High school:For the past three years, I have given a presentation on careers in international affairs at Massachusetts Girls State.

College:I have given talks on various foreign policy issues at universities in the United States and Europe.

For the past two years, I have talked about careers in foreign affairs to international business students at Southern Connecticut State University.

Continuing education:I am a presenter at the Osher Lifelong Learning Institute at the University of Connecticut Waterbury campus.

"A thoughtful and provocative presentation on radical Islam in Europe. You did a fine job with a controversial topic."

"A terrific presentation. You presented a thoughtful and chilling picture of Islamic extremism."

"I can assure you that everyone enjoyed your presentation and the discussion that followed."

"Leslie outlined some amazing times she had encountered throughout her life and impressed Girls Staters with her aspirations and drive for success and adventure."

Clemens Heni's blog
The American Center for Democracy
My email

"Tales of the Foreign Service"

"The EU, the Mideast and Anti-Semitism"
Paper presented at the conference,
Global Antisemitism and the Crisis of Modernity,
at Yale University, August 23 - 25, 2010.

"The Rise of Muslim Extremism
and the European Union"
Council for International Visitors
in Collier County
Naples, FL, March 27, 2007

"The International Role of the EU
from an American Viewpoint"

"The Middle East Conflict
and the European Union"

"Interim Governments: Institutional Bridges to Peace and Democracy?"
Participant in a workshop
at the Naval Postgraduate School,
Monterey, CA, July 14-15, 2005

"Defending Europe: A Job for NATO
or the EU?"
Indianapolis Council on Foreign Relations,
Indianapolis, IN, May 17, 2005

"A New Transatlantic Security Relationship:
Can We Get There?"
Central European University, Budapest, Hungary, October 20, 2004

"The Role of the Military in the Reconstruction of War-Torn Economies"
Seminar panelist, Chatham House, London, England, June 24, 2003.